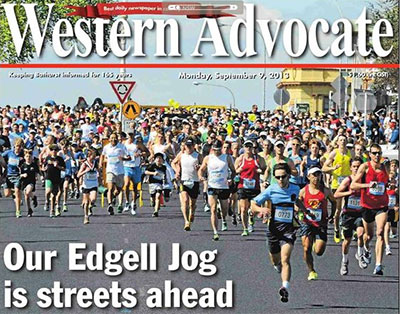 The Edgell Jog commenced in 1976 to mark the 50th anniversary of the Edgell organisation.

Edgell was the first company in Australia to start canning vegetables with the launch of Edgell Asparagus in 1926 in Bathurst. It is an Australian icon synonymous with quality-canned vegetables, prized for taste, convenience and value for money. In 1995 Simplot Australia founded when Edgell was acquired by the JR Simplot Company. Simplot Australia is now the major sponsor of this non-profit community event.

The first jog attracted 800 competitors and was called the Jubilee Jog. Over the years the total number of participants is in excess of 50,000.

With the rise in awareness to health and fitness through exercise, the Edgell Jog promises an enjoyable family fun outing and the category and draw prizes for finishing within the 90 minute time limit is an extra incentive.

Many local businesses support the Jog each year with prizes or cash. All our valuable sponsors and supporters are acknowledged on our Sponsors page.

Local service organisations including Rotary, Quota, Scouts and Guides give voluntary support on race day and in turn are acknowledged by a cash donation. Any surplus funding is donated to worthy local charities, selected by the committee each year. 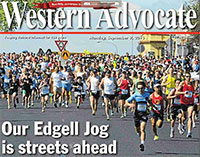 In 2011 the Bathurst Edgell Jog course was altered from an 8km event to a 7.5km event to ensure competitor safety when crossing the Great Western Highway.

The first three male and female competitors to finish receive cash prizes of $1,000, $500 and $300 respectively and if the course record is broken then an additional $500 will be awarded.